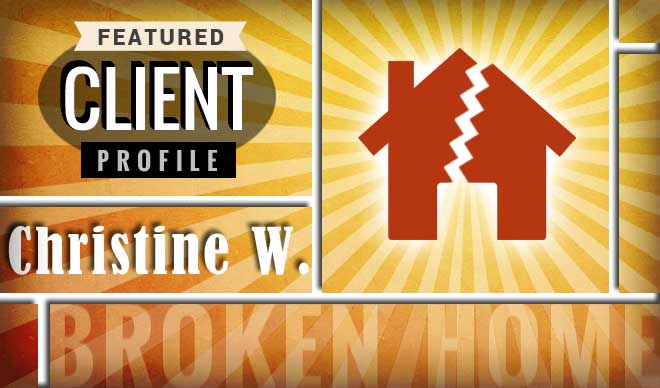 “Unexpectedly my husband walked out leaving me with a daughter, mortgage and my income was cut by 60 per cent.”

With such a devastating loss to her household income, Christine felt hopeless and turned to debt to make up for the loss of her husband’s income, however she quickly learned adding more debt to her growing pile of debt was too much to carry alone.

“I struggled for a while and made my payments in the beginning, but more and more they were a few days late and then I was only making minimum payments. Before I knew it, I resorted to using my credit cards to make payments on other bills and twice I took a loan out to get caught up. I started using my bank overdraft every month just to buy gas and groceries.”

Christine now a single mother carried a crippling $22,000 debt on her back while trying to support her daughter. She did this for almost two years with no help from anyone. And her husband’s child support payments were of no help to her – his payments would always bounce; forcing Christine to use credit to keep her household a float.

“My husband’s child support kept bouncing most months so I just used credit cards to get by. I was drowning in debt.”

There came a point in time where Christine had enough of her debt load and she desperately needed to do something about her debt. She felt alone and a complete failure for struggling with her debt. It came to a point she got tired of the same cycle day in and out – she wanted change.

“One day I realized that I was working so hard to get nowhere. It was like trying to walk up on the down escalator. I had seen an ad for Consolidated Credit and called. The counsellor was very frank about my income and my debt load. It was time for me to make a change.

And that she did. Christine completed Consolidated Credit Counseling Services of Canada’s debt management program 14 months early and now she is 100 per cent debt free.

“It was a relief to have one payment monthly which covered my debts. I never faltered from that commitment. I paid cash for any purchases, saved for items I needed and learned to budget. I finally started seeing a light at the end of the tunnel and could breathe. Thank you Consolidated Credit for your professionalism and your support.”