Shai A. – Shatters the debt ceiling 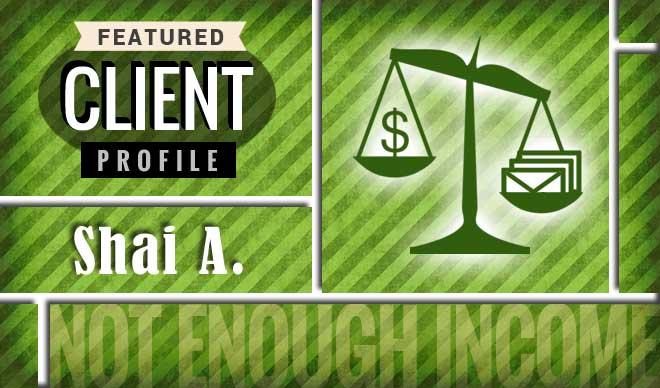 “I was trying to help my parents, who live overseas, financially with the bare minimum that I could and attempted to go visit them at least once a year. As you can imagine saving for emergencies was a luxury that I could not afford.”

Shai tried his best to make ends meet however his finances took a turn for the worse when he lost his job during the recession in 2009.

“I took loans, a line-of-credit and maxed out my credit cards to hold me over. I also paid for some expensive self-development it took eight months until I found that job.”

As Shai’s debt grew to almost $38,000 he knew he was in a financial crisis and he needed help.

“I went through some rough personal crisis and my debt just continued to sky rocket.”

He was caught between a rock and a hard place and he felt like the walls around him were caving in.

“I was struggling to pay for groceries, gas, rent and utilities, car payment (never mind clothes, entertainment and even debt repayment).”

Shai had enough of struggling and he wanted a way out. One day he was going through some files he had when he first arrived in Canada. He saw some booklets from Consolidated Credit Counseling Services of Canada. He remembered he got the booklets from a seminar he attended. Without hesitation, Shai contacted Consolidated Credit and he has been on the path of overcoming his struggles with debt ever since.

“Consolidated Credit was my final and only hope to any way out of this huge debt that I incurred over time. They made me feel that they are on my side and will help me through this.”

Shai is now debt free after completing Consolidated Credit’s debt management program and he couldn’t be any happier.

“Today I feel that I have got back my dignity. The money that was going towards debt repayment will now be at my disposal. If I managed well all these years (5 years) without it, I might as well continue to do so by putting it in a savings/emergency account or RRSP/TFSA.”