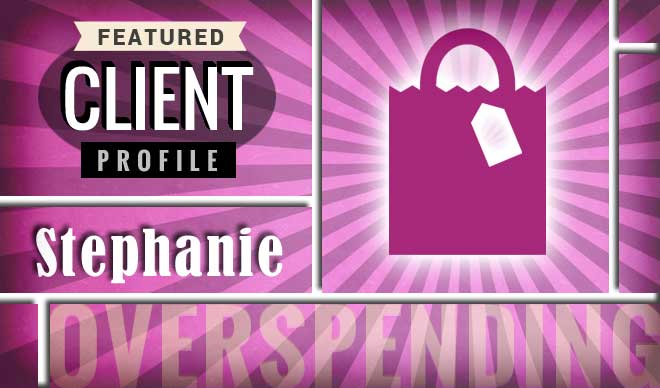 “Growing up my parents didn’t have a lot of money, so I wouldn’t get a lot of stuff compared to other kids. I guess when I began getting credit cards, I saw it more as a way to get stuff now rather than wait and save money. That’s how I got in the mess that I got in…I wanted it now and wasn’t going to wait and save money.”

According to Stephanie, the enjoyment of being able to make on the spot purchases quickly faded when she realized that her debt load was ramping up to an unsustainable level.

Her run in acquiring debt began innocently enough- with a move West in 2007 with a boyfriend, complete with dreams of fortune and great jobs as the lure “I sold everything I owned and fit it in a small car to drive to Edmonton and do what everyone else was doing, make money. But unlike some people who’ve made the move, I made almost no money and nearly declared bankruptcy.”

When she moved, she had minimal, manageable debt (including a couple of low-balance credit cards and a furniture loan) but that quickly changed as the couple settled into their new reality. Simply, Stephanie’s boyfriend at the time struggled to keep a job. Her plans to work in construction got railroaded when she sustained a shoulder injury and got laid off after three months. They were faced with the burden of trying to keep up their lifestyle with income that either wasn’t there, or was unsteady. They turned to credit as a means to an end – which resulted in some dire consequences.

Stephanie found herself at a debt crossroads. “At that point, I was considering declaring bankruptcy. I was getting phone calls constantly.”

She had heard from a friend about credit counselling, and after an internet search, found Consolidated Credit and got the ball rolling.

She says that the help she got from Consolidated was key to getting control back over her finances and restoring her financial health.

The greatest challenge was getting the information organized. Stephanie’s credit problems centered not only on the amount (about $12,000) but on the fact that there were numerous creditors.

“It’s (credit counselling) a great option if you’ve gotten yourself to the point that you need someone to help you out. Consolidated Credit was really good with all of my creditors. They spent a lot of time on my account dealing with different creditors. It was a really good process,” says Stephanie.

He stuck with it, and was successful in paying off her debt over a two-and-a-half year period. At 28, she is married with two kids and has a much rosier financial picture than she did a few years ago, with the asset side of her balance sheet growing too.

“We just bought our first house last month and all my good financial decisions now are due in part to the help I received from CCCSC and the many lessons I learned about managing my finances.”

What does Stephanie take away from her experience? “What I have learned is now I won’t just go out and buy anything with my credit card. I pay off my credit card every week or every two weeks.”

Have your circumstances placed you in a similar situation to Stephanie’s? Take heart, there is help available. Call Consolidated Credit at 1-888-294-3130 or get started now with a request for a Free Debt Analysis.