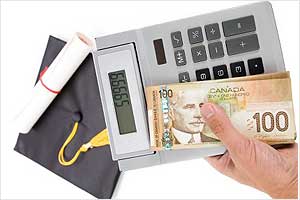 (TORONTO, ON) – A recent BMO study showed that Canadian parents are expecting to pay close to half (42 per cent) of their children’s post-secondary expenses, including tuition, books, and living expenses. But parents may be biting off more than they can chew. The projected costs for a child born in 2014 are expected to top $140,000 for a four-year degree.

But it wasn’t always this way. Education was such a government priority in the 1960s that tuitions were reduced to token levels. However, economic conditions and government priorities changed after the 1980s and as a result, post-secondary funding was severely reduced. The figures below show a dramatic increase in tuition costs:

So how are parents dealing with sky-rocketing tuition?

BMO found that two-thirds (66 per cent) of parents have started a Registered Education Savings Plan (RESP) – a significant increase from 2012, when only 52 per cent of parents had set up a RESP.

“Worrying about looming tuition costs can be a stressful burden on parents,” says Jeff Schwartz, Executive Director of Consolidated Credit Counseling Services of Canada. “But putting aside manageable amounts each year can help to head-off those costs and prepare parents for whatever the future might bring.”

Consolidated Credit offers the following advice to parents wanting to share the cost of education:

“Despite growing costs, countless studies have shown that post-secondary education is a worthwhile investment,” says Schwartz. “Parents can help out by contributing within their means, and it will go a long way in painting a bright future for their children.”