Home » Financial News » He Shoots, He Spends! Spending on Sports 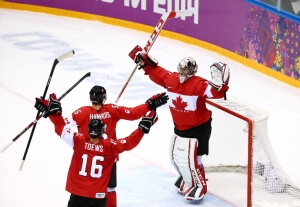 (TORONTO, ON) – Canadians across the country have been counting down the days until their favourite hockey heroes lace up their skates for another season of NHL action. So too, has the Canadian economy. Moody’s Analytics expects the coming hockey season to impact the economy in a big way over the next eight months with heavy spending on sports. Moody’s cites ticket sales, arena employment, and increased “sports pub” spending as big factors in the coming economic boost.

In the forecast, Moody’s pointed out that:

A Moneris report released after last season backs the numbers up – Canadians reach for their wallets when it’s time to support their team. During the second quarter of 2013, at the height of the NHL playoffs, Canadian spending on sports apparel rose by 3.50 per cent year-over-year, and drinking establishments saw an uptick of 3.04 per cent.

Cheering your team to victory can be one of the greatest feelings in the world, but Jeff Schwartz, executive director of Consolidated Credit Counseling Services of Canada, warns that the intoxicating rush of sports can wreak havoc on your wallet.

“Sports can create a sense of euphoria among team supporters,” says Schwartz. “Die-hard fans treat a heated game like a major life event, and much like a wedding or a graduation, they’re willing to dig deep to let the good times roll.”

“Sports are meant to celebrate athletic achievement and to revel in team or national pride,” adds Schwartz. “You don’t need to bust your budget to enjoy something as naturally exciting as the big game.”